This Court of Appeals ruling also protects plaintiffs’ rights to bring the evidence most appropriate to their claims into their pleadings, without fear that defense attorneys can color the jury’s assessment of damages based on a more narrow presentation of the harm. 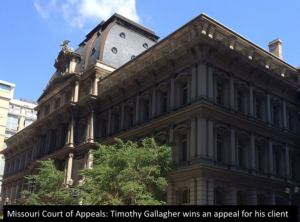 In 2014, Tim Gallagher filed suit against a negligent driver on behalf of his client who was severely injured when the driver rear-ended his car. With increasing neck and back pain that restricted his movement, career and normal daily life, the client needed compensation for medial costs as well as pain and suffering. Before trial, Mr. Gallagher amended the claim to remove the request for medical damages and instead seek compensation only for pain and suffering, along with possible future medial expenses.

Although Mr. Gallagher argued that the evidence of medical costs already paid by the victim’s insurance should not be legally admissible, the trial court found that they were allowed into evidence so long as the defense attorney agreed that those medical costs were due to the negligence of the defendant driver. After hearing this evidence on medical costs, the jury found for the plaintiff (victim) of the car accident, but limited its award to compensation for medical expenses.

On appeal, Mr. Gallagher asserted that the trial court should not have allowed these medical costs and insurance payouts into evidence unless the plaintiff had first introduced them through his pleading. Since the victim did not assert those medial costs in his pleading for trial, Mr. Gallagher argued that Missouri law prohibits this evidence from being introduced during trial proceedings. (See International Div., Inc. v. DeWitt & Associates, 425 SW 3d. 225, Mo. App. SD 2014.) Respondents claimed that Mo Rev. Statute 490.715.5 allowed the medical claims into the trial by nature of them being a consequence of the negligence of the defendant. However, the Missouri Court of Appeals for the Eastern District agreed with Mr. Gallagher that the medical costs should not have been introduced into the trial record if the plaintiff did not bring any of this information into pleadings.

In summary, Mr. Gallagher won a new trial for his client wherein his damages can be assessed on the basis of his pain and anguish and future medical needs, rather than limited on the basis of his past medical claims. In the broader context, this Court of Appeals ruling also protects plaintiffs’ rights to bring the evidence most appropriate to their claims into their pleadings, without fear that defense attorneys can color the jury’s assessment of damages based on a more narrow presentation of the harm.