Gallagher Davis has also helped hold private insurers accountable on behalf of their clients. Insurance companies often rely on doctors-for-hire to review medical records and write reports finding that claimants are not sick, not injured or are lying or exaggerating their symptoms. 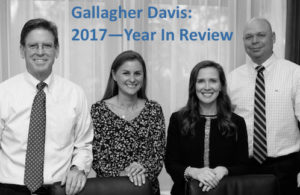 For years, colleagues had warned Matt Davis not to take on cases challenging health care benefits denials dealing with the Federal Employees Health Benefits Act (FEHBA). FEHBA is the federal statute that governs health benefits provided to federal employees and their families, but the standard of review is very favorable to the government and recovery is quite limited. However some cases are worth the challenge. After two years of litigation and two judgments, Matt secured decisive justice for some very deserving clients.

Holding the government accountable was an early theme of 2017. The Missouri Highway Transportation Commission (MHTC) is responsible for the design and maintenance of Missouri’s highways and bridges. On March 24, 2013 the St. Louis area experienced a record breaking 12.4 inches of snowfall, but a day later temperatures quickly rose into the 50’s causing snow to melt during the day and refreeze at night. Road crews need to take this refreezing into account when plowing roads, particularly on bridges and overpasses. When snow piles are left on the sides of bridges and overpasses after plowing it can create a dangerous “ramp effect,” where refrozen melted snow forms a slick embankment that causes vehicles to launch over the side of the bridge. It is a dangerous, yet preventable, condition. But when road crew shifts are rushed or are improperly trained, plowing the roads can actually make them more dangerous rather than more safe. In a lawsuit against MHTC that resolved this year, Tim Gallagher alleged that his client was the victim of a ramp effect created by MHTC after the Palm Sunday Snowstorm in March, 2013 in St. Charles. Tim’s client was driving on a St. Charles overpass on Highway 94 when his car launched over a frozen snow embankment, over the guardrail and landed on Highway 364 below.   Cases against the MHTC are incredibly complicated, involving the doctrines of sovereign immunity and statutory caps on damages. However, with skill and perseverance Tim was able to help our seriously injured client and hold the government accountable, which will hopefully lead to safer roadways for everyone.

Gallagher Davis has also helped hold private insurers accountable on behalf of their clients. Insurance companies often rely on doctors-for-hire to review medical records and write reports finding that claimants are not sick, not injured or are lying or exaggerating their symptoms. Insurers pay their own doctors to review client’s claims even after the plan member’s client’s treating physician has personally taken a history and physical, interpreted diagnostic tests and prescribed treatment. In ERISA cases, discovery into these dubious tactics is often not allowed, making it difficult to overcome this strategy. For every treating physician who believes her patient, an insurance company can hire doctors to cherry pick records and diagnoses to say that the patient and doctor are lying. In July 2017, Matt Davis scored an important victory for long term disability claimants when he convinced a federal judge that one long term disability provider’s tactics–using these hired guns to deny claims–was a “procedural irregularity” that justified further discovery. The order has already been cited by judges in other cases. It was a small triumph that will hopefully help to level the playing field for disabled people in the Eastern District of Missouri.

In November 2016, Tim Gallagher won a jury verdict in an auto case in St. Louis County. It was technically a “win” for our client, but for Tim there was no cause to celebrate. The defense had been able to introduce evidence that Tim believed should have been excluded which convinced the jury that the client’s damages were tied to the amount of money that his health insurance paid for his medical treatment. Tim’s client was not seeking reimbursement of the medical bills, so this comparison substantially reduced the amount of the verdict. Tim appealed and a higher court of three judges agreed and sent the case back for a new trial.   The case is presently pending before the Missouri Supreme Court on an Application to Transfer. The final decision will have far reaching implications beyond just this one case and should help clarify and protect the rights of people in the State of Missouri. Tim will be continuing the ongoing case into 2018.